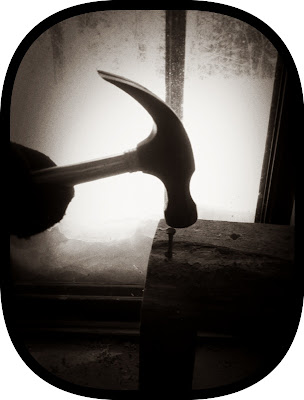 Before we had children, Kira and I always talked at length about how we would raise them.
I thought I knew how to go about dealing with certain issues, but you can't really know until you are actually there.

One topic of discussion was, and is, toys.

Before we had children, I believed that they should have few toys, and that the toys should be simple and made from wood or metal.

I believed that toys should inspire creativity and imagination and should not be entertainment devices.
Little did I know then that I would have very little ability to control the toys coming into this home.
I was immediately overwhelmed and lost control.

Auren is almost five years old.  That is five years of toys.  I've been waiting for the kids to play with toys for five years.
I am through waiting. 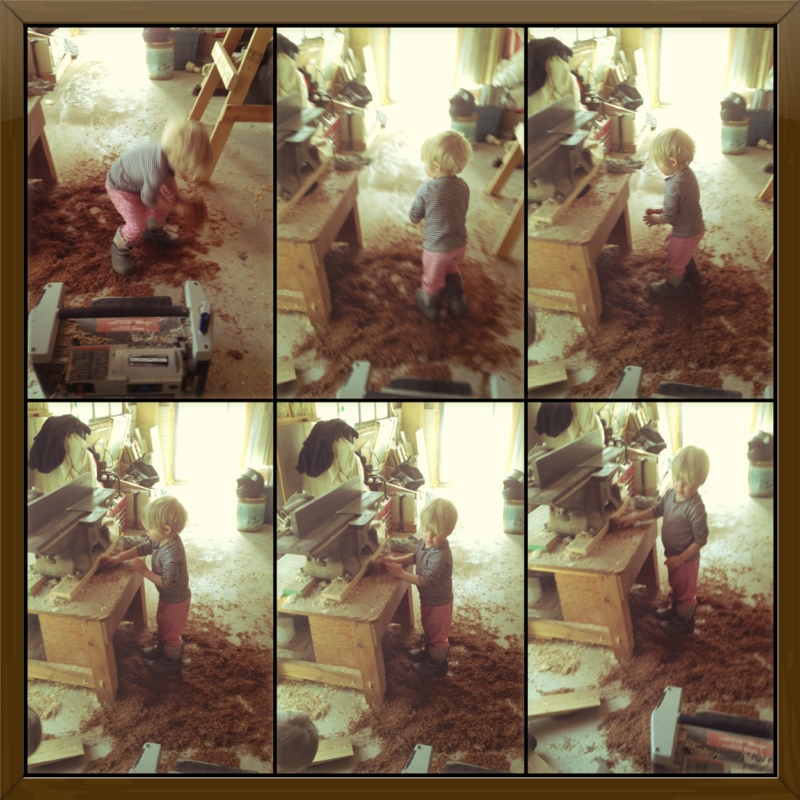 I assume that many children play with toys.
There are stores full of toys.  Rows and rows and aisles and aisles of toys upon toys.
I picture millions of kids playing with toys.  But that's all I can do is picture it in my mind.
Our kids don't play with toys.
I shouldn't say not at all.

They get the toy out of it's box or off a shelf and place that toy elsewhere in the house,
only to abandon it.

There are a few items that do get used.
The blocks get some mileage.  The LEGO sees some good action too. (Even if you don't count me.)

all the toys really do is adorn the kid's bedroom with the colour and shape of consumption.


Trophies of capitalism's success in changing how we express our love for one another.

We have been actively purging the house of toys for a little while now.
The kid's don't notice anything missing but if they see something leaving they gain a renewed interest.
We hide the catharsis as best we can.  Sometimes we just tell them that they have too much.
There simply isn't enough room to keep everything.
There are the obvious choices,
such as items that are an orgy of clutter or toys that have absolutely no hope of contributing to a child's development.
Some of the more difficult choices are those gifts that were given with honest generosity and misguided love.
As we mature as adults, as well as parents, we are learning to take control of our family and apply values as we see best.
The experience of parenting endorses the confidence to make our own decisions and be less likely to succumb to the wishes of others. 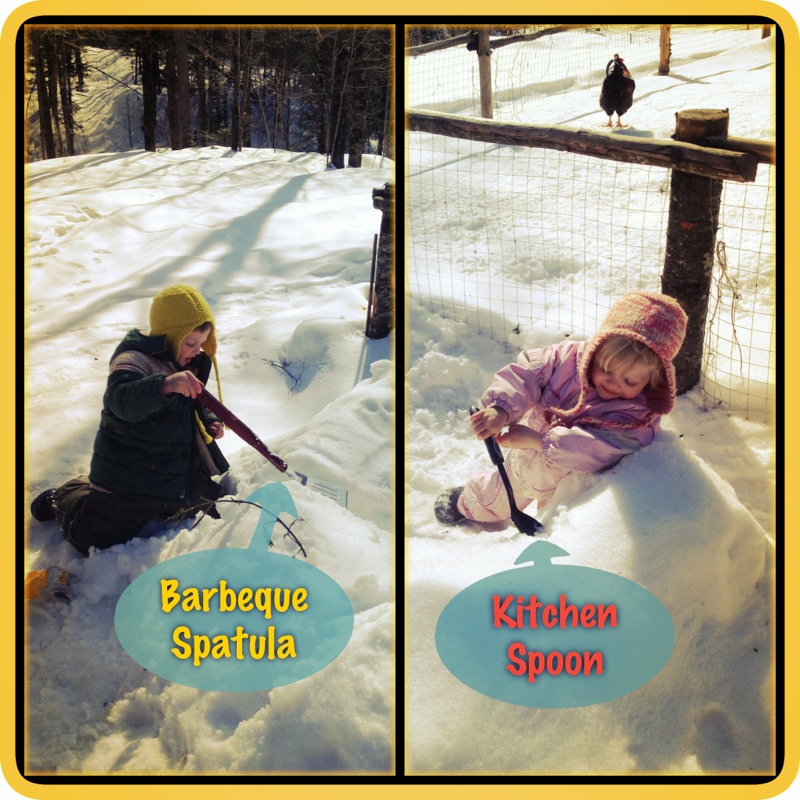 I've given the toys a fair chance to redeem their value.  They have been unable to do so.
Our children still play.....but not with toys.
Let me tell what they do play with.

They play with our stuff.
An old camera bag with a camera, some lenses, a few bits and pieces of photography gear.
A wooden box with an old compass, a flashlight, a bit of rope.
String with tape.  Auren loves nothing better than some string and some tape.
A roll of electrical tape provides hours of entertainment, at least until the roll is spent.
Old books and pens.
Backpacks filled with a teddy bear, a hat, a camera, some paper and an old organizer book.
It really wouldn't matter what it was, but they love to play with our things.  It's mostly old things because there are old things laying around in boxes and in nooks and crannies waiting to be discovered.
Discovered is way better than gifted. 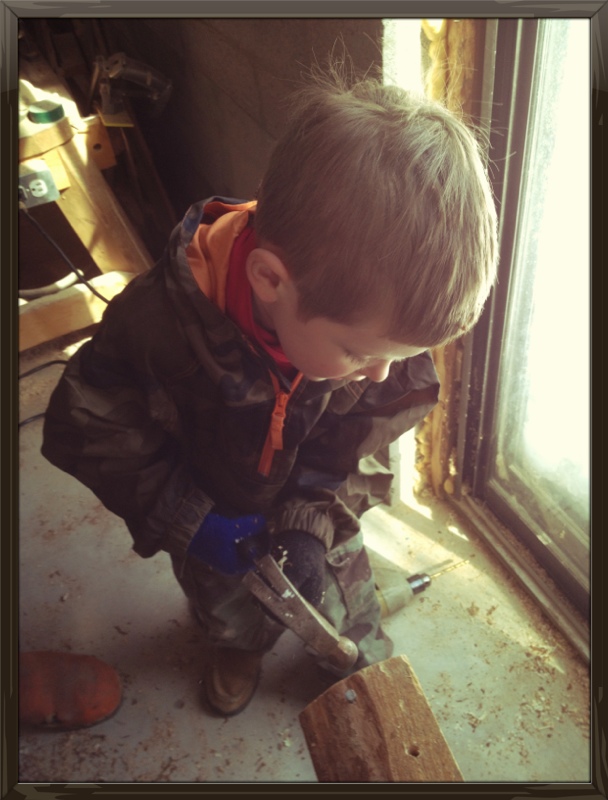 I am going to go out on a limb here and be perfectly forthright about how we parent.

We allow our little kids to play with knives.
They want to prepare food like we do.
They don't want a pretend knife with some pretend veggies that pretend to be cut.
We have tried those.  The kids know the difference.
They want to cut the food.  They want to use the real knife and actually cut the food.
Why would we deny them that.  The worst that will happen is that they will cut themselves.
Let me be clear.  I am not talking about unsupervised use of sharp knives.  We all know what happens then.

I believe that many of the toys available are meant to free the parent from the children.
You can set your kids aside with a pretend knife and not worry about them.
But then you are disengaged.  What the kids want is to use the real thing and to do it with you. 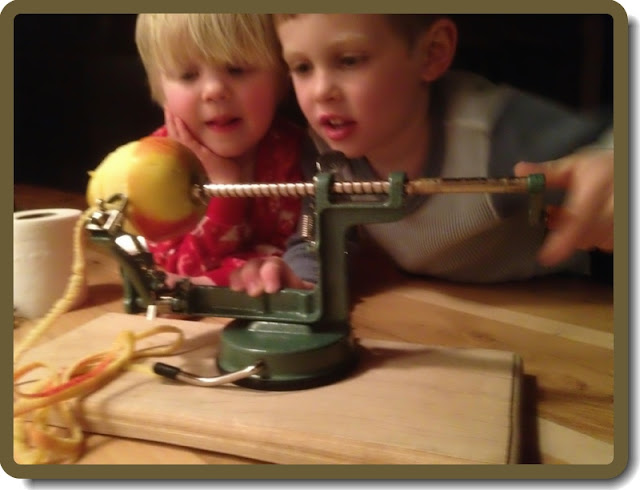 The times have changed as well.
I remember getting a tool set as a gift when I was very young.
They were real tools.  A real hammer, a mitre box and saw, a clamp.
They were not meant for me to play with by myself somewhere.
They were toys that allowed a child to emulate their parents with implements intended for smaller and less agile hands. 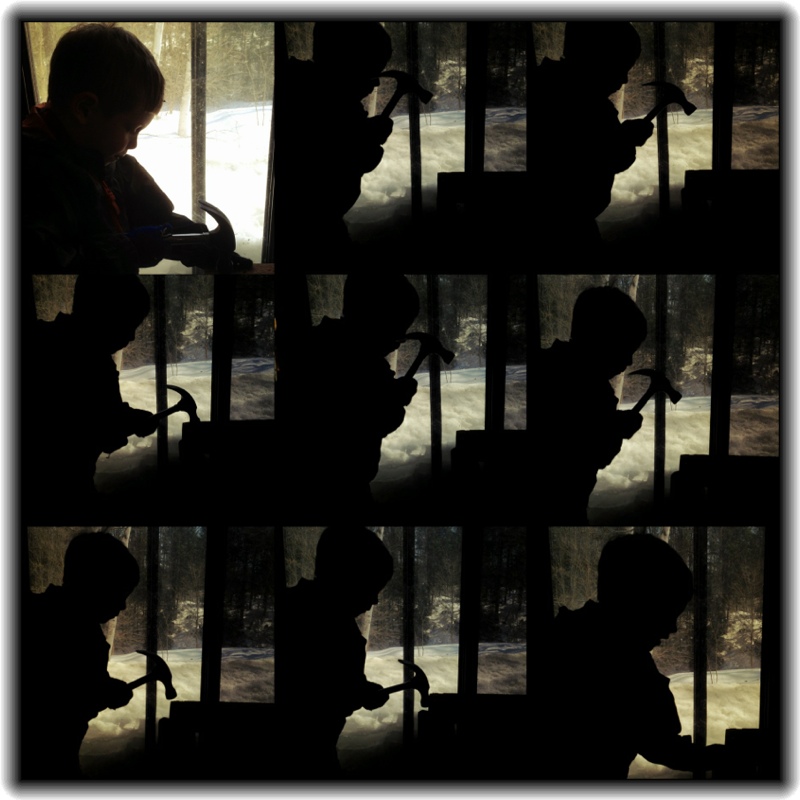 There are times when we need them to play on their own.
They need play that's stimulates their agility and imagination.
All you need for that is some tape and a stick.
But what they really want to do is to be like you.  To do what you are doing.
To act it out in their own way.  To participate in the household.
They aren't fooled by cheap plastic imitations.  They aren't easily enticed to play away from their parents.

So, we're done with toys.
There is too much stuff to play with already.

Toys don't inspire the imagination, no matter how well thought out or educationally appropriate.

Imagination comes from the soul.  Imagination is inspired by watching us.

Some toys will stay.  The LEGO is something that we can play with together.  The blocks are versatile enough to fit into other activities (such as taping and tying things). Play-dough and dress-up are also winners with our kids.
And then there is the fake plastic chainsaw.
The kids are dangerous enough with scissors.  They're not ready for a real chainsaw....
.....at least not for a few more years. 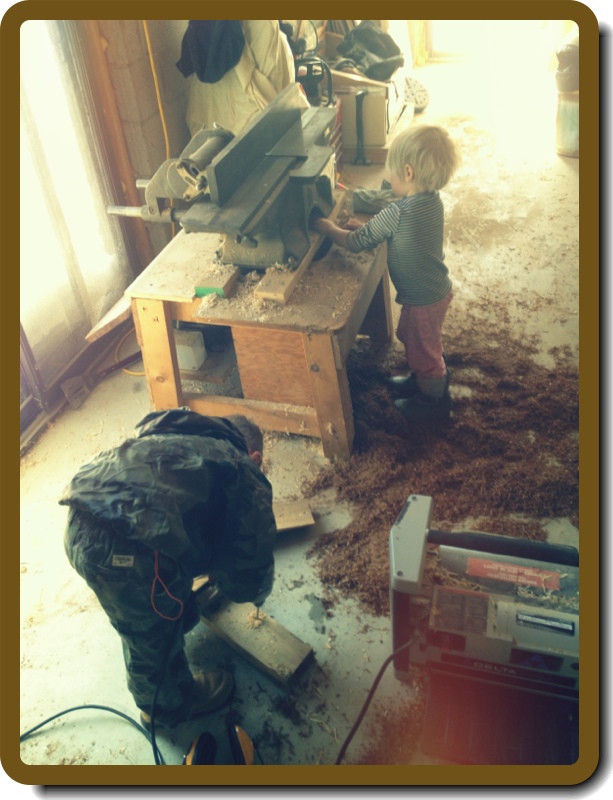 Email ThisBlogThis!Share to TwitterShare to FacebookShare to Pinterest
Labels: The Kids, The Truth