I had always wanted to build by own house.

I spent hours daydreaming about layout and design.
My father had built his first house and I wanted to follow that example.
When the time came to act, I was disappointed by the immense cost, both financial and administrative, of building one's own home.
Building restrictions prevent simple and modest construction designs.  I wasn't going to build a shack, but I didn't want a home that requires electricity just to keep the air from going stale.
Regardless, a brand new house is an expensive project, even doing your own labour.
That option quickly dissolved.
So, like most everyone else who wants to buy a home, we went for a pre-approval.
Our expectations were modest, and then, so were our options.
So we started our search.

The search was mercifully short.

It was exciting to look for a house, but we quickly realized that we would have to make some concessions. 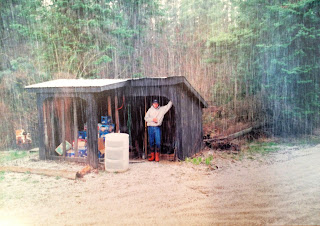 We had made up a list of priorities.
The most important for me was to be off the main roads a bit.  Often in rural areas, with few concession roads, many of the homes are right on the main county roads.  Such is it around here.  We concentrated our search on the side roads.

I specifically remember driving some of the side roads to check them out.
We skipped the one we are on because it was too rough and muddy.

I needed at least a little shop space; we looked for outbuildings.
A little pond was on the list as it is not uncommon in watershed country.
We wanted some land.  Not for working, but for walking and maybe hunting.

It happened that our neighbour Sally, with whom I worked, told me that her neighbour at the time was preparing his cottage for sale.  She recommended that we take a look.

Now, cottages come in different forms.  Many of them on the lakes are worth millions.  Our place, however, is not on the lake.  It was a quiet country cottage for two previous owners.  A kit cottage built on a concrete pier foundation.

I made the decision as soon as walked in the door.

It is two kilometers off the county road.
There is a pond.
It had more charm than anything we'd seen.
There are twenty five acres. 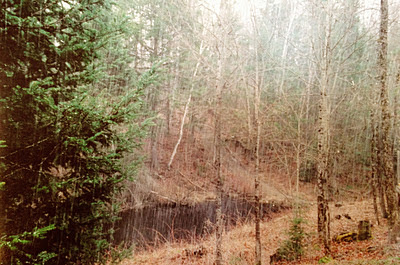