There was a crucial detail that I neglected when we planned to start keeping livestock.
The focus was on housing and care.  Making sure that the buildings and fencing would work.
Choosing the type of feed and water vessels.  Ensuring that there was good bedding and manure management.
I was very thorough in my research for both the pigs and chickens.
What I neglected was the cost of feed.
The chickens are not so bad.  They need virtually no feed during the growing season.  Our birds are wonderful foragers and left to roam freely, they virtually feed themselves.  When the Winter comes I have to step up the feeding quite a bit, but by then the number of birds has been reduced to Winter levels.
The problem arose when we started the pigs.
Up until then, we were feeding the chickens non-medicated feed.  When we brought in the pigs, they too were fed non-medicated feed and given no drugs.  However, that was still the mainstream feed, even without the drugs.  Early on, we switched to truly organic feed.  That's what threw us off.

Just to give you an idea, a 200 lb pig gets fed about 4 kg per day.  Of course, they'll eat more than that if given the choice.

Now, don't get me wrong.  I am more suspicious of the cheaper feed than I am of the organic.
I feel that the debate regarding the virtues of organic feed is over.
At least it is for me.

Compounding the high price of feed is the long drive to the feed store that I talked about in an earlier post.
There is no way that we could sustain this practice let alone reconcile it with our ideals.
We need a new solution.  That solution is growing our own feed.  But we don't have any crops....yet.

Learning the hard way about the feed has put the pressure on to get some feed crops into the ground this coming season.  Let me tell you what I have in mind. 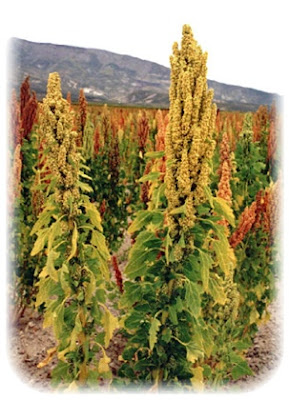 Have you heard of it?
It's a wonderful thing, Quinoa is.
If you don't already know, it is a grain-like seed that comes from a leafy plant.  It behaves much like rice when cooked but is much more versatile.
The catch?  It is an almost perfect protein source; superior to most other sources in it's completeness and absorption.  Other great attributes include it's frost resistance, drought resistance, pest resistance, disease resistance and a distinctive bitter coating that deters animals like deer from eating it.  Removing the coating is part of the harvest process.  Also, the leaves are high in nutrients and so row trimmings will also be used as a food source.
My hope is that it will thrive here on our rocky land.  It should be low maintenance and the hand harvested yields are reportedly quite high.  This is a crop that will be suitable for both us and the livestock.
I have fed quinoa to baby chicks.  It really gives them a boost that the traditional ration doesn't provide.
I should also note here that organic quinoa runs at about $10.00 per kilo. 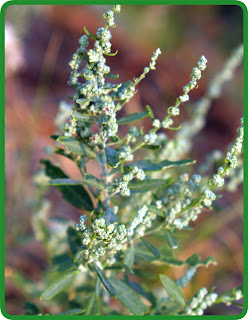 Actually, we already have the plant that became quinoa here in the form of a weed called Lamb's Quarter.  That is somewhat of a drawback however, if we want to keep our own seed because the two species will cross-pollinate. The native version is also edible but the yield is very low.

I must admit that I have been toying with this idea for a long time.  Not so much as a source of animal feed, but as a quality non-meat protein source for our family.
We have only tested a small plot in the garden with seeds from the kitchen, but we paid it no attention and therefore it provided no harvest.
This year will be different.  The stakes are higher and the need is upon us.
Even if it does not fulfil all of our needs in the near future, it should at very least relieve much of the burden of bringing in outside feed.  I still need to find out what quinoa is missing, if anything, that I should be feeding the animals.

Establishing quinoa in this, or any other part of the world will be another step taken towards regional autonomy.
The more that we are able to provide for ourselves from local sources, the less vulnerable we will be to drastic changes in the global food distribution model.
I encourage you to research more credible sources about this rugged and amazing plant.  I believe that it has the potential to solve problems greater than our animal feed costs. 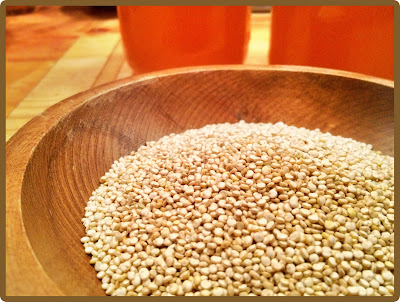 A little note about today's photos.
The only picture of ours is the wooden bowl.
The other pictures are public domain photos
used from wikipedia.

Email ThisBlogThis!Share to TwitterShare to FacebookShare to Pinterest
Labels: The Long Term