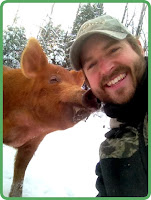 I had decided against keeping pigs a few years ago.


But, pigs are known for being the perfect homesteading animal.
High feed conversion and truly omnivorous.
They are also known for being very intelligent.  I have known people not to eat pork and pork products for that reason alone.
So, I felt that I did not want to keep an animal that was so intelligent.
Until last year.

I found out that pigs are very good at clearing land.  That makes them perfect for our homestead.
They are a carbon-neutral alternative to using heavy equipment.  They work without a driver and you can eat them when they are through clearing.  Their exhaust also contributes to the fertility of the land.
We plan to keep a family dairy cow within the next two years.
I have a piece of land suitable for creating a small pasture.
There are no trees but the land is rough and weedy.

So, we brought in some pigs. 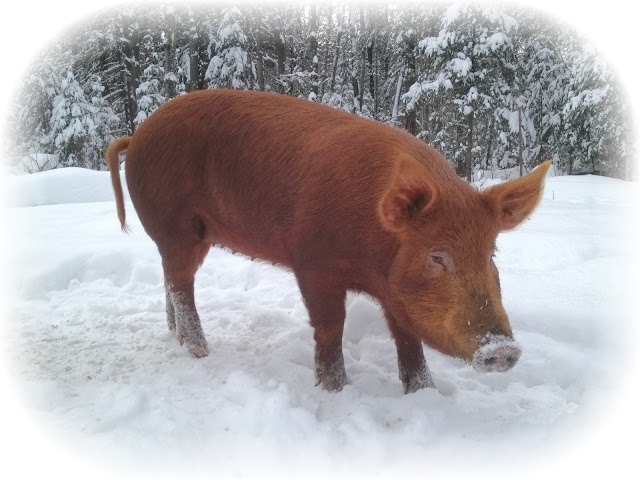 They performed their job perfectly.  You really have to witness it to understand how well and how effortlessly pigs clear land.  They don't simply remove the top layer of vegetation.  They root deeply into the ground looking for anything that is edible.  In doing so they turn the earth, bring the rocks to the surface, and smooth it out.  They exceeded my expectations.
I was surprised, however, by their apparent lack of intelligence.  It's not that they aren't intelligent. It's just that their overwhelming desire for food makes them foolish.  It also makes them less likable than a dog. 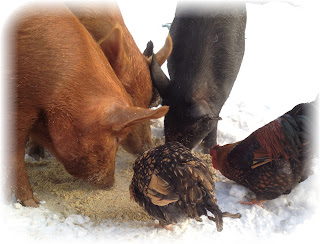 They don't want your love and affection unless they are stuffed full of food.
I suppose that if they were so much like dogs, that people would be less likely to keep them for food.
And so we didn't get too attached.
Yes, Kira got them to roll over for a belly rub.  As yes, they get scratched behind the ears and patted.
Still, when you start a project like this, the inertia helps you follow through.
We have brought three of our six animals through due course.  There are three remaining.
The holiday season gave some reprieve to those three remaining pigs, but the time has come to carry on. 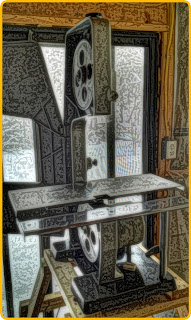 We do all of the processing ourselves.  From pen to packaging, it all happens here.  It is illegal to sell, but the quality is beyond the commercial counterpart.
And, I care for my animals too much to have indifferent strangers brutally carry out their passing in some frightening and foreign environment.
Here, they experience no fear at all, at any time.  By my hand only do they return to the earth.
I don't find the task easy.
But I wish to take responsibility for what I eat.  And we must eat.

The next animal is ready to go.  I need to get myself ready too.
I won't go into detail about the steps involved in turning a live animal into kitchen ready product.
Many people find the subject disturbing.  I know that I did.

Ask yourself something though.  Give it some thought and be honest.
Are you disturbed by the death of an animal or does the subject compel you to consider your own mortality?

I am considering doing an online workshop for anyone interested in the details.
The first workshop will be free of charge, as it will be a trial run for me.
Leave a comment to indicate if you might be interested in this or other workshops.