I had no plan for today.
Not that I don't have a daunting list.  Just no plan.
Fortunately, when you homestead, projects crop up whether you planned for them or not.

We brought pigs into the fray early in the summer.  I knew that I could handle caring for two.
So I chose to buy six; just to up the ante.
Now, I didn't arrange buyers ahead of time.  I hoped that I would find some, but never worried, knowing that we could simply eat our surplus.  My concern was only to learn pigs.  Of course, I never figured that we would still have pigs going into the winter.
We had pigs going into the winter and we still have pigs.  Three of the six have moved along with due course, but three remain.  We have three Tamworth gilts who are well bred to handle coarse weather. So far, they have thrived in all conditions.  I, however, am not doing quite as well. 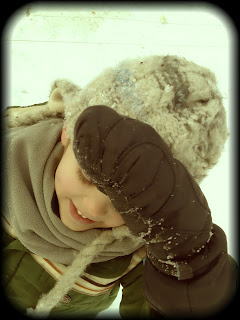 You see, I put up electric fencing to keep the pigs in their yard. Their yard is the better part of an acre.  That's a fair bit of fencing for a beginner.  I only followed the common practice of a hot wire at four inches and another at twelve.  There is a ground wire in between to balance the voltage through the fence line.
This was a great arrangement.  I was nervous at first because it was not very high, but the shock from the fence is pretty severe (I can personally attest to the debilitating effects) and so was enough of a deterrent.
We had no problems with the fence over the course of the summer.
Winter is different when it comes to electric fencing.
There are two problems that can come up if you don't plan on using an electric fence in Winter.
Firstly, the ground no longer conducts electricity enough to deliver the necessary shock.  Dry and frozen ground is a lousy conductor.  In dry climes, stockmen use alternating hot and ground wires to ensure that a pushy animal gets a good connection to the deterrent.  I covered the dry ground scenario with my three alternating wires.  I did not expect to deal with problem number two.

Yes, I know, you all see this one coming.  When the snow deepens, the fence gets shorter and shorter until there is no fence at all.  That is what we have; no fence.
But, let me tell you about the power of the electric fence.  I have taken two full hits from the fence.  I'm talking 'bare feet in the wet mud and grabbed the fence' hits.  Why?  I'd like to say that I felt that I shouldn't subject an animal to something that I wouldn't endure myself.
No, I was showing off that I could touch the fence and endure the shock.  This I had been able to do when wearing workboots.  Barefoot, however, is different. The second time was a 'fence line trimming in the rain' accident.  Not too sure what even happened there.
The point is that I don't even like to touch the fence when I know darn well that it is off.  Even when I have personally disabled the fence, I still have a hard time putting my bare skin against that metal strand.
The pigs have been hit way more than I have.  They push their luck and you can hear the squeak from a mile away.  So, even as the fence gradually lowered into the deepening snow, they were still unwilling to take that step over the wire........until today.


Kira has been worried about the fence for days now.
"Don't you think that they can get out?", she asks.
"They're too afraid to cross it.", I'd say.

A hungry pig is a determined pig.  That much I have learned.  So maybe I wasn't too surprised to be greeted this morning by one of our pigs, over eager for breakfast.  Eager on my side of the fence, not hers.
Happily trotting around the yard and frightening the kids.  The pigs are docile but still intimidating because of their size and strength.
Now I had a plan  Now I had something that had to be done first.  "Now" was pressing enough that I didn't even run for the camera to show all you folks what it looks like to have a pig loose outside of her yard.
A hungry pig is so determined, that she will follow you wherever you go if you have her breakfast in hand.  With few calls she came running to my side and followed me right back across the fence where the other two, 'not so brave piggies', were waiting nervously. (Nervous that someone else would get their breakfast).
I put up two more strands of wire across the stretch where she stepped over.  They could easily get over the fence anywhere along the line but their focus is on where I come from when I feed them.  She didn't even test the new wires.  Back at wet piggy nose height , the wires are more threatening. 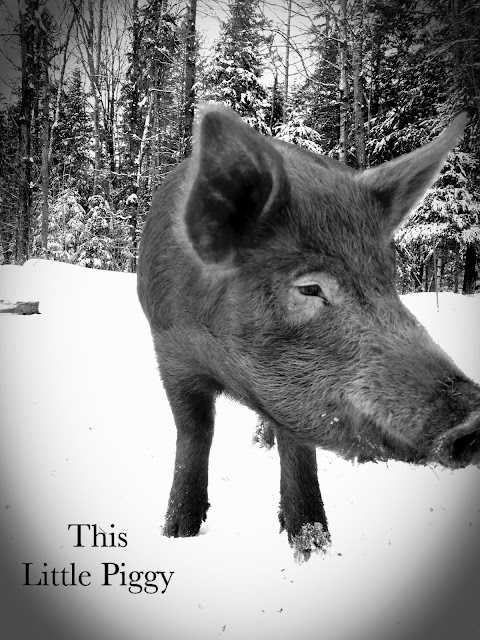