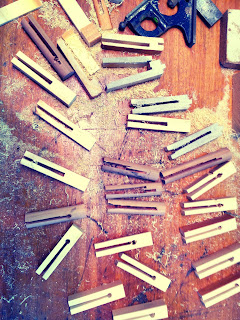 I enjoy making things.  Most people do.
I especially like making things that you would normally buy in store, but would not make at home.

Two of the reasons for buying rather than making are:
1.  You aren't able to make it.
2.  It's so cheap at the store, why would you?

Not being able to produce something at home because you don't have the ability or the tools is one thing.  Opting for the inexpensive version at the store is another.

Much of the decision is based on how much money you would earn in an hour.  If you could build a car yourself in a week but it would take you 3 years to earn the money to buy it, then it is definitely economical to build it yourself.

If, however, you make enough money in an hour to buy the car, then it is more economical to earn the money and use it for the car.
Take, for example, clothespins.  Much cheaper than a car.  So cheap, in fact, that you would never consider saving money by making your own.

But, at what cost? 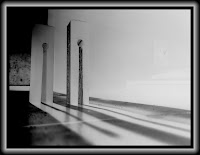 Allow me to generalize a little.
I am willing to bet that the pack of clothespins was not manufactured domestically.  We know where they were made.
Some place where the pay is low.  Probably overseas, far away.
Who made them?  Where did the wood come from?
How does the manufacturing plant affect the locale?
How much energy was used to bring them here?
Why are they so cheap?

The price tag is low.  The cost is high.

You could argue that we support foreign economies by purchasing their products.
How would they survive without us buying?
Export our environmental laws, workplace safety laws, resource management laws and so on,
then maybe I'll buy that argument.

I am a hypocrite.
I consider the financial cost when I decide whether it is more economical to do it myself rather than use my buying power.

So, I considered the cost of making my own clothespins.

Today's batch was my first, so I didn't do the math.
I am, however, pretty sure that the four hours it took didn't save any money.
That is not to say that I didn't consider the real cost to real human beings. 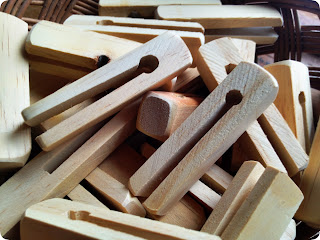 This is a radial-arm saw.  It works great.  It does all sorts of things.  It goes this way and that.  It goes here and there.  It does almost anything you want it to.  It's also very dangerous.

This is a Beaver/Rockwell saw that I bought for $100.  I would never recommend one unless you have some disability insurance. The modern versions have so many safety features that you can barely get near them.
I thought that I would give a little 'how to' session about how I made my clothespins.
But you might cut your fingers off.
I need to work on a better way.  I never did consult the internet so you may want to.
I will say that the grain must be on it's end to preserve the wood's strength.
I kept them simple.  Kira likes a country elegance so I refrained from hand sanding each clothespin and omitted the traditional finger contour.
They're a little rough but they work.
I used scrap pine and mostly my time to make them.  The saw doesn't need to run much.
It would be simpler and safer to use handsaws, but I only thought of that just now.

The next time will be easier.  I'll continue to make our own.
It's one less item to pick up at the store.  And another step closer to self-sufficiency. 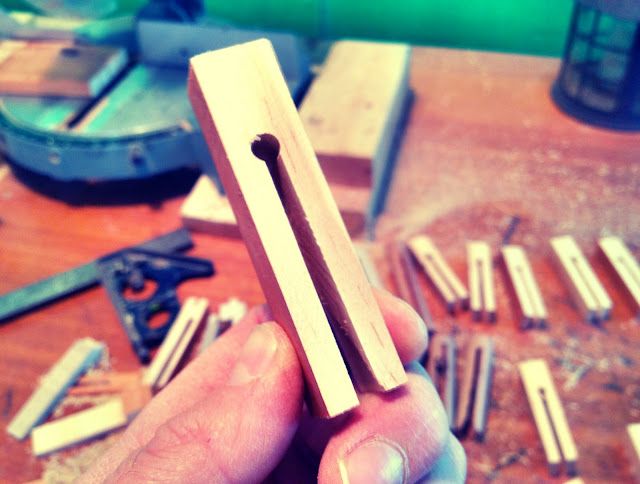